When Charley Wang and Tal Safran started thinking about getting into the food business, they quit their tech jobs and launched into a nearly yearlong research project. They were young, recent graduates with tech chops, and they wanted to explore the intersection of technology and food. But they weren’t entirely sure what direction to head in.

They thought about food delivery systems. Incubators. Catering. But the more Wang and Safran researched, the more they realized they weren’t seeking a concept for a typical tech-based food startup. They didn’t want to focus on convenience, speed or ease, which, they soon realized with some disappointment, was what most startups were embracing.

They learned they actually wanted to do the opposite: to make food more personal, more human, and give a boost to people who wouldn’t otherwise have the resources to turn their culinary skills into income. That, they started to see, might have the added benefit of bringing food to areas with little or no access to it.

“We realized the biggest opportunity in the food space was around helping cooks. The current food industry is all about the consumers—the whole on-demand trend,” Wang said. “We decided to build a tool to help them build their dream jobs as cooks. We wanted to help people become better entrepreneurs.” 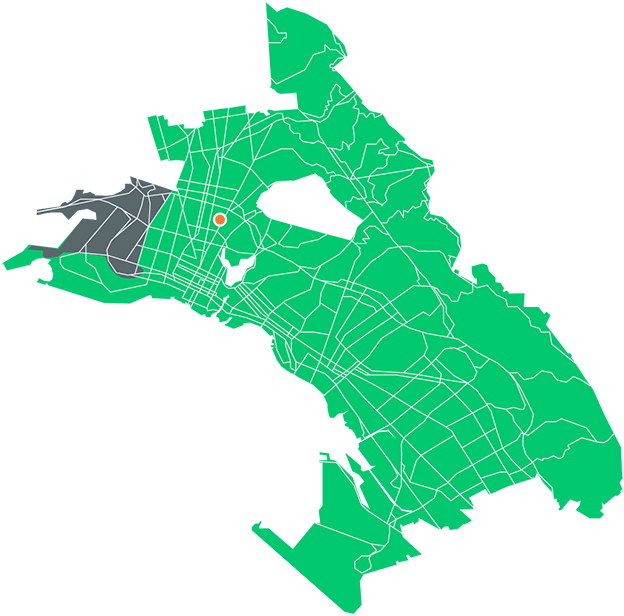 Food deserts in Oakland are concentrated in the northwest, and Josephine’s headquarters is based nearby. Their business model addresses food access inequity by equipping local cooks to sell food in their neighborhoods. Economic Research Service (ERS), U.S. Department of Agriculture (USDA). Food Access Research Atlas.

So the two launched Josephine, an online platform and network that helps home cooks turn their kitchens into businesses—and into places where underserved communities gain access to food with a personal twist.

It works like this: Members log in to the Josephine system, browse the offerings of home cooks in their area, order and pay. Then during a scheduled window, they pick up their meal from the cook’s kitchen.

“We serve the cooks, first and foremost,” Wang said. “But they create a food access solution to the largely residential communities they live in—often vulnerable communities where there aren’t tons of restaurants or grocery stores.”

Most attempts at serving food deserts involve putting stores, markets or gardens into underserved communities and hoping members of those communities come to them. Josephine does it the other way around by giving home cooks—immigrants, stay-at-home parents—the ability to get into the food business without having to find the capital to start a restaurant or buy a food truck.

“There are barriers to starting a food business. But it’s not just in having a kitchen. It’s education and social support,” Wang said. “They’re amazing cooks. They hear that all the time. But they don’t come from a background where they’re being told they can be entrepreneurs.”

“We serve the cooks, first and foremost. But they create a food access solution to the largely residential communities they live in—often vulnerable communities where there aren’t tons of restaurants or grocery stores.”

The company launched in December 2014, focusing on the Bay Area. Josephine’s networks have since expanded up the coast to Portland and Seattle, with a smattering of cooks in other areas of the country.

The organization is still small—just 10 employees—and learning. At first, Wang said, the company focused on the platform, on providing the website and on forging the Josephine brand. But they’ve since realized it’s better for business when the company’s personality disappears. That allows the cook-and-customer relationship to flourish. (The company takes a 10 percent cut from sales.)

“The emails come from the cooks,” Wang says. “It’s in their voice. We’ve found that if a cook says ‘Come buy my meal’ it’s twice as effective as if we say it.”

The company has also learned that education has been critical. Josephine now provides help for cooks to learn about kitchen safety, sanitation and the economics of the business. (Josephine inspects its cooks’ kitchens and requires cooks to hold cooking safety certifications.) The company doesn’t set prices for cooks, but does help them understand what margins they need to maintain to be profitable.

“Some cooks are more savvy than others. Some are really strong hobbyists, and others have had some professional background in the cooking industry,” explains Lisette Silva, who started as a cook in the Josephine network and now works for the company, overseeing cooking operations. “We work on educating them—we say these are the profit margins you should sustain—but we don’t know their markets, so we leave it to them.”

It’s better for business when the company’s personality disappears. That allows the cook-and-customer relationship to flourish.

Josephine has also had to navigate around the law. In California, as in many states, selling food out of a home kitchen is illegal. Yet, despite that, there’s a flourishing underground food economy, which encompasses everything from church bake sales to sales facilitated by social media. (The latter got a lot of news coverage recently when California threatened Mariza Ruelas, a mom from Stockton, with jail time for selling homemade food through a Facebook group.)

Josephine, based in Oakland, has authored a bill that would legalize home kitchen sales, which the company says has the support of the California Environmental Health Lobby, the organization that oversees inspections of the state’s restaurants. The bill, introduced by two state assembly members, has garnered support, especially among immigrant and low-income communities where cooking is often the most accessible lever of financial empowerment.

In those communities, home kitchens are small, but influential, economic engines. They also forge relationships through food, connecting people to healthful and varied options in neighborhoods where convenience stores are sometimes the only food-buying option.

“This broadens what’s available to them,” Silva says. “The platform is a conduit for them to try something new.”