On Detroit’s East Side, One Entrepreneur is Hoping to Open the City’s Only Black-Owned Grocery Store

DETROIT — When he was 19, Raphael Wright began losing weight quickly. He felt achy and dehydrated much of the time. His doctor eventually confirmed that Wright was diabetic, and the east Detroit native’s struggles coping with the disease would eventually lead him to a realization that would change the focus of his life.

He now hopes that focus will help bring change to his neighborhood.

“I was young but I knew I wasn’t the only one in my community that needed to be empowered around food as it relates to health in the black community,” Wright said. “So I vowed to do something about it.”

Less than a decade later, the 28-year-old is planning to open a black-owned grocery store in the neighborhood he grew up in. Wright refers to the east side “a disinvested area.”

“We have some up-and-coming neighborhoods but overall you see high rates of poverty, the lack of healthy food options and the lack of black business ownership,” he said.

There are no black-owned grocery stores in Detroit, according to Auday Arabo, president and CEO of Associated Food and Petroleum Dealers, which represents more than 4,000 stores in Michigan, Ohio and surrounding states. The city is 80 percent African-American, but its last black-owned grocery, Metro Foodland, shut its doors in 2014 after three decades in business on the city’s west side. 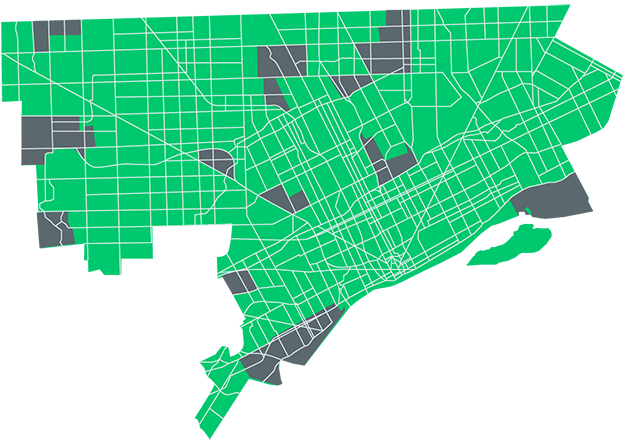 Food deserts are spread throughout the city of Detroit, with pockets of low food access in northern Detroit and along the outskirts of the city. Wright and Easter are hoping to build their grocery store in an under-resourced area of the city, providing residents with much-needed affordable and healthy food. Economic Research Service (ERS), U.S. Department of Agriculture (USDA). Food Access Research Atlas.

James Hooks, Metro Foodland’s owner, was beloved in Detroit and was an active member of the city’s food business community. There are around 77 full-service grocery stores in Detroit, at least 65 of which are independently owned, according to Arabo.

“Competition has been hard on Detroit’s grocery store owners as well as succession planning for family businesses,” Arabo said. “We love to see diversity in the grocery business, and it’s important, but a lot of times it boils down to costs and supporting businesses.”

Arabo said that funding efforts to diversify food business ownership by organizations including the Michigan Good Food Fund are helping independents grow. But, he said, entrepreneurs seem to be more needed than ever.

Wright, who founded Urban Plug L3C, an organization designed to build wealth within Detroit’s inner city, believes a black-owned grocery store would be both good business and good for the community. Along with his partner Theo Easter, Wright invested $10,000 in the venture and is aiming to open his store, Us Food Market, in spring of 2018.

Urban Plug’s goal, Wright said, is to grow businesses to improve access to food. Small retailers—like gas stations and “party” stores—don’t carry healthy and nutritious food, he said. Throw in the lack of transportation options for many in those neighborhoods, and it becomes obvious that food accessibility is a real problem in Detroit,1 he said.

“You eat out [at] fast food spots, liquor stores or gas stations and the hands that prepare our food don’t care about us,” Wright said. Until we learn to appreciate better quality food, that will never end. We technically have grocery stores but the food in those grocery stores is not quality.”

Wright believes that we need to consider racial equity and education as key factors in working with Detroit’s food entrepreneurs. He points to other organizations in the city, like the Detroit Black Community Food Security Network, a group of individuals and organizations committed to building food security and advocating for food justice for black residents of Detroit, that operates a 7-acre urban farm called “D-town.”

“Yes, we’re talking about growth and development, but we’re also talking about black-owned business,” Wright said. “All good work sells itself, and we’re going to be the example for other businesses and entrepreneurs. We have too many great minds in the black community for us not to succeed.”

“You eat out [at] fast food spots, liquor stores, or gas stations and the hands that prepare our food don’t care about us. Until we learn to appreciate better quality food, that will never end.”

Wright said his new store’s mission will be to provide high-quality food in the inner city and introduce a group investment platform through the venture. His GoFundMe page says his goal is to unite “inner city residents so they can invest in our stores.”

Wright’s entrepreneurial insights are hard earned. His parents both worked long hours, so, as a kid, many of his meals came from liquor stores and “Coney Islands,” local diners that serve food like hot dogs and chili fries. Wright hopes to open his store close to a school and in a neighborhood with watch associations where he can work closely with the community.

“We need to care about feeding people first,” he said. “Food isn’t just a business, it’s a right and a service, and we gotta start caring about what we’re putting in our stomachs. It’s a care business and we need to care more.”

Wright’s is an important initiative at a moment when Detroit is rocking again. The city is experiencing a period of increased investment and urban development, but some residents argue that more needs to be done to create equity for all entrepreneurs, particularly those who target development in neighborhoods beyond downtown Detroit that have yet to feel the impact of increasing investment dollars moving into the city.

“Detroit is a vast city and there has been a lot of investment coming in recent years” said Arabo. “It’s important that small businesses serving all neighborhoods can flourish, not just the entrepreneurs in neighborhoods that happen to be doing better than others.”

Wright said he wants to build a growing community of entrepreneurs on the east side, and that he’ll try to model that growth on his own experience.

“We knew nothing about the grocery store business when we set out to build on this idea,” he said. “But we know our customers and we know the community. So we gotta keep going, keep rocking.”