ALBUQUERQUE, N.M. — At the cavernous, 133,300-square foot Roadrunner Food Bank, Josh Norman walked through a group of 15 volunteers sorting fresh produce into bins. The food bank and its volunteers serve 70,000 hungry New Mexico residents a week, and even feed animals at local farms with unusable produce and wolves at a local sanctuary with unusable meat.

“Nothing goes to waste,” said Norman, the operations and outreach coordinator at MoGro, a food subscription program. In June, MoGro launched a partnership with the food bank, where it will receive, store and pack its produce into boxes before distributing them to community centers across the region.

Resourcefulness is at the heart of MoGro’s newest business model. Founded as a mobile grocery store in 2011, MoGro transitioned to a produce subscription service in 2014, made significant changes to its produce and distribution models this June, and now plans to introduce recipe boxes to better serve its customers.

Anytime an organization fundamentally alters its business model, stakeholders, customers and employees face uncertainty in the transition. Is it possible for a business to pivot too frequently, even if the business is adapting to better fulfill its mission and help more people? MoGro, on pivot number four, is about to find out.

After former Sysco CEO Rick Schnieders and his wife Beth retired to New Mexico in 2009, they hoped to get involved with food access issues. The couple partnered with the John Hopkins Center for American Indian Health to address Native American nutritional issues.

Native American communities have a long, traumatic history of food access inequity.1 Forced off their lands, Native American tribes lost access to their traditional agriculture practices and as a result, their traditional diets. Because tribes often received government rations that lacked nutritional value, they struggled to acclimate to their new diets, with resulting health consequences. 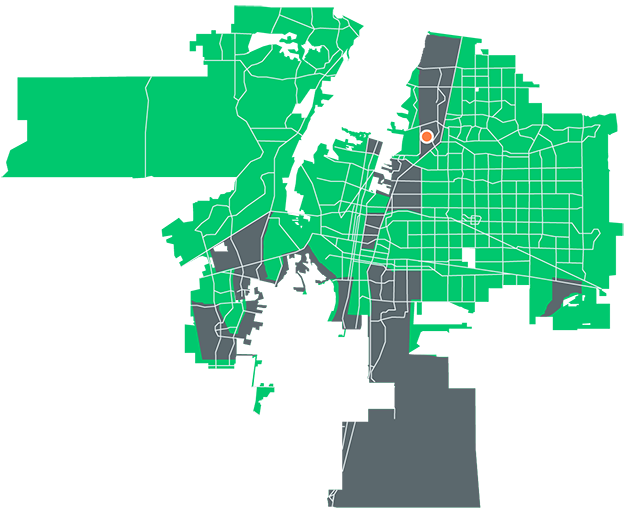 In Albuquerque, food deserts are concentrated in the western and southern areas of the city, and MoGro’s new headquarters is based at the Roadrunner Food Bank in south Albuquerque. MoGro’s subscription and community center pick-up model targets not only low-income residents of Albuquerque but also surrounding rural communities. Source: Economic Research Service (ERS), U.S. Department of Agriculture (USDA). Food Access Research Atlas.

Today, nearly all Native American lands are food deserts as defined by the U.S. Department of Agriculture. New Mexico suffers from the second highest rate of poverty in the nation and the third worst rate of Native American and Alaskan Native adult obesity.2 These factors form a potent combination for health risks in Native American communities. As the Schnieders worked with other food access organizations on nutritional education, they noticed families would still go home to find convenience stores were their only real food options.

“So, we went home and had the ‘aha’ moment where we decided to start mobile groceries,” Rick said.

There are 19 active pueblos, or villages with multi-story and attached homes modeled after the cliff dwellings of Ancient Puebloans, occupied by Pueblo Indians in New Mexico today. In its first iteration, MoGro consisted of a small, hot, dusty beer truck that a driver would park in the Santo Domingo pueblo (now called Kewa) and set out tables of produce for purchase.

But food quickly spoiled in the beer truck, so in 2012 MoGro transitioned to two grocery store trailers equipped with refrigeration and freezer sections. They traveled around 100 miles per day to visit the Kewa, San Felipe, Cochiti, Laguna, San Ildefonso and Jemez pueblos, leading to significant wear and tear on the expensive equipment.

“It wasn’t the scalable model we knew we needed to find,” MoGro director Rebecca Baran-Rees said. The team had to ask, “How do we systematize this whole operation?”

Switch to a CSA model

One of the biggest successes of MoGro’s mobile grocery store model was acting on a community-driven desire for better access to healthy food options. In its second iteration, MoGro switched to a Community Supported Agriculture-style model with a food subscription service, reaching a broader audience than the Pueblo Indian communities it had started serving.

Today, MoGro customers can order $20 boxes of fruits and vegetables online, and they can pay with food stamps. By pooling a broader geographic region, the communities MoGro serves have access to affordable produce at local pick-up centers—from health clinics to pueblo wellness centers.

MoGro now has eight pick-up sites—four in pueblos and four in Albuquerque and Santa Fe—plus one rural delivery route in the East Mountains. People in rural communities lack access to transportation, health care, employment centers and healthy food, making them often the most in need of services, and the most difficult to serve.

MoGro leaders have found that urban community sites often have smoother long-term implementation. With full-time employees at health clinics and invested stakeholders like parents at schools, they have consistent partners distributing boxes and championing the service to other members of their communities.

“If they’re not taking ownership and making it theirs, it’s not going to be successful,” Baran-Rees said.

“I think that’s really important,” she said. “If they don’t feel comfortable and welcome, then I don’t think they’ll come pick up their box.”

Human connections also enable the site leader to generate thoughtful and strategic insights about how MoGro can better help and market to the community, Richards said.

The switch to a subscription model reduced operating costs by nearly 50 percent. MoGro now operates with a steady budget of around $200,000 per year to serve 120 to 150 families per week.

“I’m able to show with grant reports that we have been incrementally adapting ourselves to become more efficient and serve more families,” Baran-Rees said.

She said having “the right people and expertise at the table” has been instrumental to MoGro’s success. When others ask her advice on getting started in food equity work, Baran-Rees responds with a question of her own: “Have you been talking to people who sell food?”

“They’ll be able to tell you proven advice and things you should look for,” she said, “like the percentage you’re shrinking and how to scale your model and what people want to buy.”

The Santa Ana pueblo—79,000 acres straddling Interstate 25, the main drag between Albuquerque and Santa Fe—has been populated since the late 1500s. Today about 600 people live on the reservation, which includes a native plant and tree nursery.

Seventy-five percent of the nursery’s plants are native, grown for restoration purposes. Its clients include landscape designers and architects interested in the nursery’s 250 species of mainly low-water use plants. Half an acre at the nursery is devoted to growing MoGro produce. One hot May afternoon, Josh Norman grabbed a shovel and joined the nursery staff—mostly tribal members—to break ground on MoGro’s previously fallow plot.

For the first time, MoGro is partnering with a pueblo to grow hyperlocal produce to include in subscription boxes, a key way of reinvesting the Santa Ana community, whose weekly subscriptions have recently dropped.

The Santa Ana experiment is one component of MoGro’s third iteration, which focuses on further cutting operational costs. In June, the organization transitioned from 100 percent organic produce from a local farm to a blended model of local and regional produce and organic and non-organic produce.

MoGro has also partnered with Roadrunner Food Bank, which distributes more than 10 million pounds of produce each year to partner agencies and regional food banks across the state.3 Teresa Johansen, Roadrunner’s chief operating officer, said that MoGro’s “alignment of services” in addressing food access issues is a strong foundation for their partnership.

MoGro now rents storage for its dry, refrigerated and frozen goods at less than 10 percent of what it was paying previously and saves $3 per box for packing services.

“In their case, they were outsourcing so much of their work to a for-profit organization,” whose natural goal is to make a profit, Johansen said. This was a prime time “in MoGro’s development to save a ton of money by using this kind of facility.”

Norman said Johansen’s mentorship has included consultations on cutting overhead costs, recommendations for other local nonprofits MoGro could partner with and access to the food bank’s volunteer software, which streamlines 14,000 volunteers per year.

For food equity nonprofits like MoGro, finding ways to cut costs and diversify revenue streams is key, Johansen said. Between individual donations, corporate donations, grants, rebates and services that the organization could be reimbursed for, an organization should never be entirely dependent on one funding source.

“That’s a lesson a lot of people don’t learn until way too late,” she said, “so they work themselves into an expense structure they can’t sustain.”

As a result of progressing from a mobile grocery store model to a produce subscription service, MoGro is no longer a one-stop shop for families. Now MoGro is transitioning to its fourth iteration, providing all-inclusive meal boxes with recipes, supported by its partnership with Newman’s Own Foundation. The shift will better fulfill MoGro’s mission of educating families about healthy eating by ensuring they know how to use all the ingredients in their box.

For an organization addressing deeply entrenched, systemic food equity and health issues that took hundreds of years to develop, the team must show the same long-term dedication to creating and perfecting a solution, according to Rick Schnieders.

“It’s really important for all of us to remember that these projects take longer, cost more and take more energy than you can anticipate on the front end,” he said.